Hawaii ! Finally, I tried to do the usual and catch the public transport but was turned away as they have rules about
luggage on busses…shit! Now I had to get a shuttle and that cost $15 as opposed to $2 for the bus. Relenting I hopped on a shuttle and an hour or so later made it to the hostel. The Polynesian Beach Club hostel, sounds cool eh! And it was this would have to be one of the best places I have stayed as far as meeting people and socializing. It wasn’t the flashest place pretty basic but honestly you don’t spend your day’s in your room, do you? and the staff were also great, most of witch are travellers themselves. I spent three weeks on Oahu except 1 day when a group of us whent over to the Big Island. The first week was spent diving doing a couple of speciality (Wreck and Photography) diving courses so I didn’t do any partying .

Sean from Reef Pirates Diving picked me up for my first dive ( the WW2 Corsair plane) of Hawaii kai about a 20 minute drive. The sea out on that side was a little rough and the boat wans.t that big either so I was keen to get into the water quick. We didn’t waste any time as I was the only one with Sean we were able to get in straight away. We jumped in dumping our BCD’s immediately and managed to get down to the wreck pretty quick. You can hop into the cockpit if you want but it pays to check for that the bloody huge resident Moray eel isn’t hiding in there. I had a look in and couldn’t believe how big he was, his neck was thicker than my thigh. It was great to be able to dive on this wreck as it is the only one that was not intentionally sunk, its pilot ditched while on a training mission, the wreck was latter refloated and moved to deeper water. After some decent bottom time and trying out my new camera we surfaced. Getting back on the boat was a lot harder but after a bit of acrobatics I managed. Our second dive was a drift dive along a wall where I saw my first green sea turtle, I thought he was going to swim straight into me but he turned at the last minute. The rest of my dives were just as great, my favourite was a wreck called the Y0257 sitting at about 30m not far of Waikiki. The sea’s were a little calmer over there and the boat was a spacious catamaran. Green sea turtles are often spotted here sleeping on the deck and they didn’t disappoint me as there was about 6 on the first dive giving me plenty of opportunity for pictures. 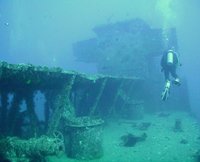 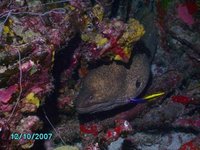 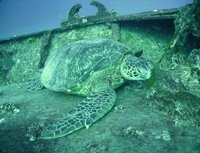 So after a week of great diving I was in need of much drinking. I had 4 Irish guy’s in my room so there was no shortage of drinking partners. We went to a bar called the Long Yard which has over a 150 different beers on tap. We didn’t stay long as its quite expensive but I did manage to sample a couple of the local Kona varieties ,very…..nice! Later on that week I made some more friends with which I would spend the rest of my time there hanging out with. For something different a few of us decided to head over to the big island Hawaii, where we hired a car and drove up to see the Volcano. There were five of us Mark, Liz, Toby, Chuck and me. We had great day and plenty of laughs courtesy of Toby who was the only person not to bring (as he put it) a snorkel system. He had the last laugh though, buy the time we got back from the mountain it was getting dark so we went to the Kona brewery instead….great choice! & had one of the best beers ive ever tasted. After a couple we shot back to the airport and back to Oahu.

Sometimes you meet people and click straight away, that was exactly the case with these guys. We would meet for breaky every morning and then if no one had any tours booked we went to the beach and chilled until we worked up a thirst upon which we would return to the hostel stopping via the ABC store to buy some Icehouse ( the only beer when your on a budget $9 for a 12 pack….bargin) oh yea ,ABC stands for All Blocks Covered ( Different to the ABC stores in Australia). These stores are litteraly on every block, every corner and are a general store similar to a 7 eleven. Back to the important stuff, drinking, we did a lot of this especially Toby ( Mr neutral) from Switzerland, Mark and Liz from Eng , Stew and Carly from Aus and of course me! The beer of choice was of course the cheapest you could find and that was Icehouse. It became a catchphrase which was said in a swiss german accent as it sounded funnier thanks to Toby. I would buy the ice and pack the esky as I couldn’t have my fellow mates drinking warm beer This became a daily ritual, even as our group slowly shrank due to some having to head back home we would still do it. It got to the point where there was only Toby and I left, it didn’t matter there was just more beer for us! 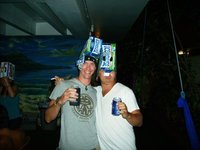 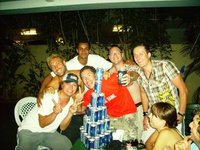 Monday , North shore! Oh yea! Every Monday there is a trip organized and Andy (one extremely chilled dude working at the hostel) is our driver and guide. We had an awesome time, diving into some nice big beach break waves, jumping of the rock, and lazing on the beaches. In the afternoon we stopped of at Lanaki, this is the bay where the beach set of the Tv programme Lost is located We walked for about 20 mins along the beach before coming accros the set. Its guarded by a lone security guard and a bit of barier tape so your able to take pics so long as you don’t cross the line. We stayed in this spot and watched the sunset before walking back to the car. 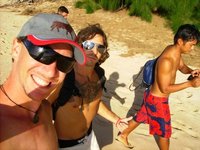 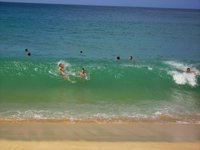 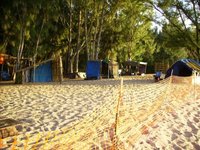 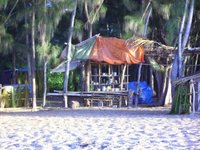 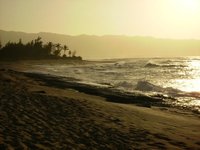 My last night in Hawaii, Halloween! I managed to find a costume at the last minute, a few of us found a place having a sale so we managed to all find something at a reasonable price. I spent the night sipping my beer through a straw( as I was wearing a mask) walking the street checking out the costumes of others and cutting some rug on the dance floor at a place called the Red Lion, cheap beer and Karaoke! I didn’t bother going to bed as I had to catch my shuttle at 4:30 am, so I partied through until morning and went straight to the airport……what a flight…flying jetstar too! 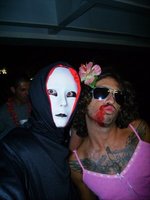 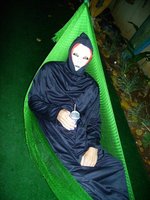 So some 13 countries 20 flights and 55 different beds, Im finaly home. I feels kind of weird hearing only Aussie accents after being around foreigners for so long. Im goning to have to go back to work at some stage too but it wont be long before im off again, it’s hard to get back into a routine when you haven’t had one for a while……Well! by for now ill be back with more in a couple of Years on my next trip to catch up with all the friends I made on this one!

This blog requires you to be a logged in member of Travellerspoint to place comments.

If you aren't a member of Travellerspoint yet, you can join for free.